I thought that I would start this new blog with sharing the guiding principles of the Ecosophy platform that I am a strong supporter of. Besides it’s always good to have your principles in writing so that one can reflect on them in times of uncertainty and confusion.

1. “All living Beings have intrinsic values”

▶ The flourishing of human and nonhuman life on earth has inherent value. The value of nonhuman life-forms is independent of the usefulness of the nonhuman world for human purposes.

2. “The richness and diversity of life has intrinsic value”

▶ Richness and diversity of life-forms are also values in themselves and contribute to the flourishing of human and nonhuman life on earth.

3. “Except to satisfy vital needs, humans do not have the right to reduce the richness and diversity of life”

▶ Humans have no right to reduce this richness and diversity except to satisfy vital needs. Considering the mass of proclamations about what humans have the right to, it may be sobering to announce a norm about what they have no right to. That is, we must take into account situations in which we humans cannot evoke and appeal to a right. The formulation is not intended to automatically condemn as wrong all the actions to which we cannot invoke a right.

“The term vital need is left deliberately vague to allow for considerable latitude in judgment. Differences in climate and related factors, together with differences in the structures of societies as they now exist, need to be considered. Also, the difference between a means to the satisfaction of the need and the need itself must be considered. If a whaler quits whaling, he may risk unemployment under the present economic conditions. Whaling is for him an important means. But he and his boat are urgently needed in the control of overfishing and the use of barbarous methods. And the whaling nations are rich enough to finance such inspection, especially along the coasts of developing countries. So there is not a question of vital need to kill whales.”

4. The flourishing of both humans and nonhumans life and cultures requires a substantial decrease of the human population.

5. “Present human interference with the nonhuman world is excessive, and the situation is rapidly worsening.”

▶ People in the materially richest countries cannot be expected to reduce their excessive interference with the nonhuman world to a moderate level overnight. Less interference does not imply that humans should not modify some ecosystems as do other species. Humans have modified the earth and will probably continue to do so. At issue are the nature and extent of such interference.

The fight to preserve and extend areas of wilderness or near wilderness should continue and should focus on the general ecological functions of these areas. Very large wilderness areas are required in the biosphere for the continued evolutionary speciation of animals and plants. Present designated wilderness areas are too small and too few. 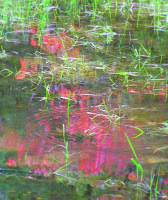 ▶ In view of the foregoing points, policies must be changed. The changes in policies affect basic economic, technological, and ideological structures. The resulting state of affairs will be deeply different from the present and make possible a more joyful experience of the connectedness of all things.

7. “An ideological change would essentially entail seeking a better quality of life rather than a raised standard of living.”

▶ The ideological change is mainly that of appreciating life quality (dwelling in situations of inherent value) rather than adhering to an increasingly higher standard of living. There will be a profound awareness of the difference between big and great.

8. Those who subscribe to the foregoing points have an obligation directly or indirectly to participate in the attempt to implement the necessary changes.

▶ Contribute and act. And do it now!