Make Your Voice Count—Get out & Vote!

In line, waiting... At least I am lucky to live in a country that gives me the responsibility to vote. So today, I am exercising my citizen duty. 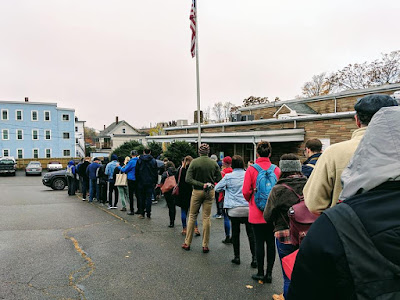 Today, I vote for all the young lives who lost their lives in mass shootings and did not have a vote on the matter. I vote for their families and for their young friends who might vote for the first time today. My crying heart needs a rest that is never at reach as shootings and massacres are our life routine here in America. I am voting against the silence and against the lies that it can't change without having us lose our human decency any further... This has to change.

Today, I vote for the families that were separated for months and those who have been separated and still have no news about their little ones, or still know nothing about where their parents are. I also vote against walls of shame, and against a world of despair walks... This has to change.

Today, I vote thinking of all our women who denounced their abusers and have been ridiculed by the system. I also vote for my sisters and our daughters who have been silenced, as well as for those who remained silent for fear of being punished, laughed at or dismissed... This has to change.

Today, I vote for the millions of us in the world, who understands the impact of our actions on the climate, on the Earth's ecosystems, on our own species, and the millions of species that we share this world with -and that we are losing at an unprecedented rate (with the latest indicators published last week estimating a recorded and accelerating 60 % decline in the world's vertebrate populations abundance). I vote against ignorance and denialism... This has to change.

I have many more reasons to go to the voting booth, but these are the few that I have in mind and will keep in my heart when I check those boxes on my ballot in a minute. Changes happen with the public servants we chose to put in the Congress and House seats. Those choices are the expression of our votes together. That vote is our citizen responsibility. Make your voice count. Go vote.

Posted by Akilee at 1:04 PM No comments: